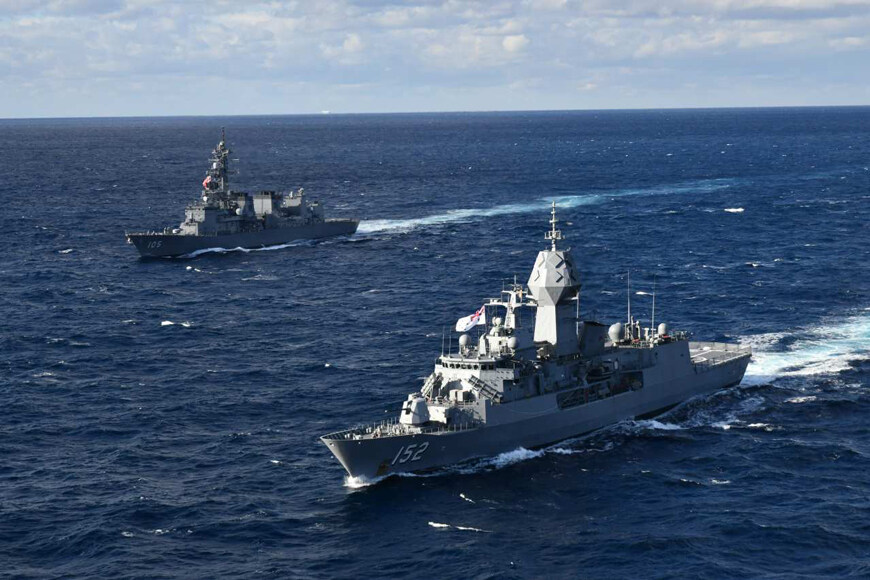 Japan and Australia are growing ever closer. What does this mean for maritime security in the region?

Admiral Murakawa Yutaka retired from the Japan Maritime Self-Defense Force (JMSDF) in 2019. During his last assignment in service as Chief of Staff, Maritime Self-Defense Force, he assisted in revising the National Defense Program Guidelines and the Medium Term Defense Program in 2018. After graduating from the National Defense Academy in 1981, Admiral Murakawa proceeded to Maritime Officer Candidate School, commissioning in 1982. After serving onboard JS Teruzuki(DD162) and JS Katori(TV3501) as junior officer, Admiral Murakawa was designated as supply and accounting officer. Being assigned to various billets relating to administration, personnel and finance, he gained extensive experience and knowledge about logistics. Prior to his assignment as Chief of Staff in 2016, Admiral Murakawa served as Director General of Personnel and Education Department in Maritime Staff Office, Commander of Maritime Materiel Command and Vice Chief of Staff in Maritime Staff Office. Admiral Murakawa’s professional education includes courses in JMSDF Staff College, Joint Staff College and in the National Institute for Defense Studies. Admiral Murakawa is a native of Kanagawa Prefecture.

Vice Admiral Tim Barrett retired from the Royal Australian Navy in 2018 after a 42 year career.  In his last role, as Chief of Navy and professional head of the Service, he progressed plans to regenerate Navy capability which is manifest in the National Ship Building Plan and associated contracts.  He now advises on a broad range of maritime issues to government and industry and sits on a number of related boards. In uniform he initially trained as a mariner but later specialized in aviation.  Serving at sea and ashore, he gained extensive command experience most notably as the Commander of the Australian Navy Aviation Group, Commander Border Protection Command and Commander of the Australian Fleet, prior to becoming Chief of Navy.  He also has broad experience in staff positions dealing in capability development and personnel management. He holds a Bachelor of Arts in Politics and History and a Masters of Defence Studies, both from the University of New South Wales, and has completed the Advanced Management Program at Harvard Business School. In early 2017 he published ‘The Navy and the Nation: Australia's Maritime Power in the 21st Century’ in which he outlined the extensive challenges and opportunities for Navy and Australia over the coming decades.

Dr Tosh Minohara is Professor of International Relations and Security Studies at the Graduate School of Law and Politics, Kobe University where he holds a joint appointment with the Graduate School of International Cooperation Studies. He received his B.A. in International Relations from University of California, Davis, and his Ph.D. in Political Science and Diplomatic History from Kobe University. He is the founder and chairman of the non-profit organization, Research Institute of Indo-Pacific Affairs (RIIPA). He also serves as senior advisor to KREAB as well as the external advisor to the Japanese Ministry of Foreign Affairs (MOFA). From last year, he lectures at the Japan Self-Defense Force Staff College for both the Air Force and Navy. Prior to the COVID-19 pandemic, he has held various visiting appointments with universities and institutions such as Harvard University, University of Iowa (Noguchi Distinguished Fellow), University of Oxford, Leiden University, Stockholm University, Kuwait University, Seoul National University, University of Washington, Inha University, National Taipei University, Academia Sinica, Mexico Autonomous Institute of Technology (ITAM-Yoshida Shigeru Chair), Jagellonian University, and most recently the Roosevelt Institute for American Studies (RIAS) in the Netherlands. His core academic interests deal with the diplomatic, political, and security dimension of US-Japan relations. He is the author of multiple publications and is a frequent commentator/contributor for newspapers, television, and radio. In addition to an op-ed column for the Sankei Shimbun, he writes monthly serialized essays for the journals Issatsu no Hon (Asahi Shimbun Press), Jiyu Minshu (LDP), and Daisanbunmei. His academic achievements have been recognized as a recipient of both the Shimizu Hiroshi Prize and the Japan Research Award.

Dr Bec Strating is the Director of La Trobe Asia and an Associate Professor in Politics and International Relations in the Department of Politics, Media and Philosophy. Her research focuses on maritime disputes in Asia and Australian foreign and defence policy. She have written three monographs, most recently "Defending the Maritime Rules-Based Order" (2020). In 2019 she was awarded an Asian Studies Visiting Fellowship to research at the East West Center in Washington DC for three months. She was also a visiting affiliate fellow at the Institute of Southeast Asian Studies in Singapore, an affiliated researcher at Georgetown University and am currently a non-visiting fellow at the Perth US Asia Centre. She has co-edited two special issues and multiple journal articles and book chapters. In 2019, her second monograph, The Post-Colonial Security Dilemma, was published with the Institute of Southeast Asian Studies in 2019. In 2018, she was awarded the prestigious Boyer Prize by the Australian Institute of International Affairs for best article published in the Australian Journal of International Affairs in 2017 for her paper ‘Timor-Leste’s Foreign Policy Approach to the Timor Sea: Pipeline or Pipedream?’ She has written over 70 commentary pieces for organisations such as Lowy Institute, Australian Strategic Policy Institute, The Conversation, East Asia Forum, New Mandela, Asia Global Online and Australian Outlook. She regularly provides comments to media including the ABC, the Australian and Sydney Morning Herald. She has testified in Australian federal parliament as an expert witness. She tweets @becstrating.

Dr Bryce Wakefield is the national executive director of the Australian Institute of International Affairs and a visiting fellow at the Australian National University. He has lived, worked and researched in the United States, Japan, Europe and New Zealand. He trained as a political scientist with particular expertise in International Relations and the international affairs of East Asia. From 2012 to 2018, he was a tenured lecturer of area studies and international relations at Leiden University in the Netherlands. At Leiden he taught numerous classes on the foreign policy and domestic politics of Japan, the politics of East Asia, comparative politics, and the relationship between politics and culture. He speaks English, German, Japanese and is proficient in Dutch.